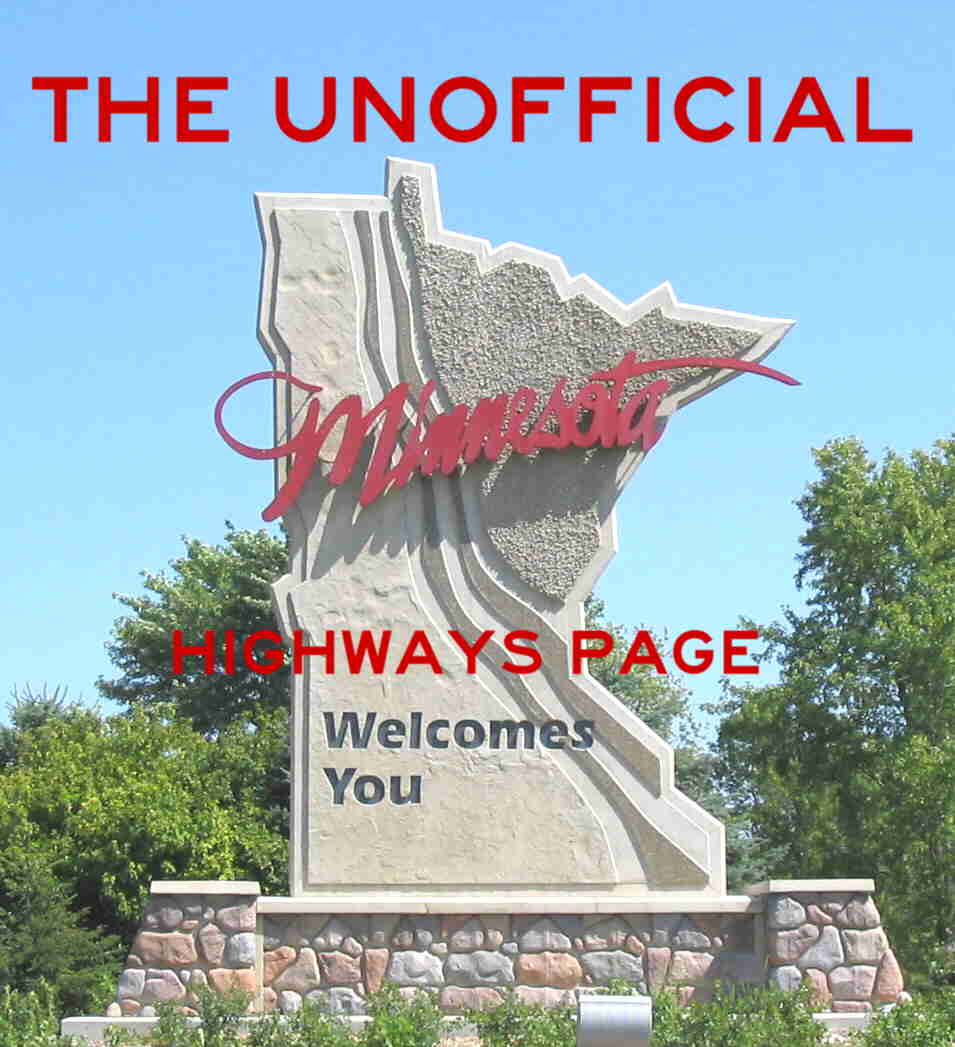 A history and overview of Minnesota's highway network from the standpoint of a long-time user who enjoys the technical aspects of building and maintaining highway systems.

Base photo: Welcome sign on MN-60 SW of Worthington

Perpetually under construction (and not just from April to October).

Disclaimer. This site is not associated in any way with the Minnesota Department of Transportation (MnDOT), which is the official keeper and custodian of the Minnesota Trunk Highway system. All data herein are derived by me from various sources, and any opinions or speculation are mine as well. Readers are invited to comment on my opinions and also encouraged to contact me to point out any erroneous information.

About me and my plans for other highway sites. Visit steve-riner.com

What's New? Click here for recent updates to this site.

Links to other related sites.

Lots of different types of links. A Map of Minnesota (the number one search phrase), Minnesota tourism, construction information, and other highway pages, as well as important information on how to make an aluminum foil beanie to repel those psychotronic signals. Take a look.

I have relied heavily on my personal collection of road maps, both from Minnesota and other states (usually with U.S. maps on the back). These include the following:

Most graphics are strictly home-made (unless noted otherwise) using Visio and converting to JPEG format. Or, some files are saved from Visio as .TIF format and converted using MicroGrafx Photo Magic to a .GIF file. I initially used the FHwA look-alike font, Blue Highways, once available free from Larabie Graphics on my sign GIFs. However, I lost this file and found that Larabie now charges for the full set font. Subsequently, I downloaded the Roadgeek 2000 series offered at http://www.triskele.com. I actually like this new font a little better. Old-style sign fonts are courtesy of Bruce Cridlebaugh, who developed this font and offers it for the princely sum of $5. Ron Wilbanks sent me images from the Minnesota Manual of Uniform Traffic Markings from 1929, 1939, 1953 and 1963. Some of those are included on the route markings page and used as background for older signs.

Both Andrew Field and Matthew Salek have given me encouragement and suggestions. Adam Froehlig has provided me quite a bit of information from his own research on the history of and upcoming planning for the Twin Cities freeway system. In fact, Adam has provided more information than I can acknowledge. Monte Castleman has also helped, especially with updates of information. Thanks, Ron Wilbanks, for the authentic old route marking sign graphics. I also should acknowledge the others who have developed similar pages and given me ideas and inspiration.

Please send me your comments. Now that I no longer live in Minnesota, I need reports on highway openings, renamings, plans, etc. Photos also welcome, and will be posted with appropriate credit. My new e-mail address for road-related matters now is <HighPlainsTraveler@msn.com>

Millions have visited before July 11, 1998, when I started tracking. Check here for statistics since that time. Extreme Tracking went on-line July 17, 1998. Over 10,000 hits in the first year! Only half the usual volume since moving an abbreviated site to AOL, but now that the whole site is back up, I expect this volume to slowly increase again to previous levels.